So as I mentioned in my last post, I jetted off on holiday last week to the island of Majorca for some rest and plenty of sunshine. And sangria. Sangria is a Spanish holiday essential.

Me and Jamie booked our trip through Thomas Cook last November, and we chose the Sentido Don Pedro hotel – an adults only hotel with 4 stars and a recent refurbishment under its belt. I was looking forward to a week of not getting dive bombed by a snotty child in the pool or screaming babies in the dining hall. Bliss.

In the run up to the holiday Thomas Cook were amazing, sending regular emails to ensure we knew what to expect (as we all know I am the most anxious, catastrophic thinker so I enjoyed being constantly updated) and keeping us informed on any changes to our holiday – for example, the Balearic Islands have just introduced a new ‘tourism tax’ so it was great that they gave us a heads up that we would have to pay for this when we got to the hotel.

Our flight was at 6 in the morning, and we flew from Luton airport. For some reason we decided to stay up all night with no evening nap, leaving the house at half 12 in the morning and setting off down the A1 into the darkness. The roads were wonderfully clear and we listened to Lana Del Rey and Grimes and whatever other random artist decided to pop up from the tracklist on my phone, while talking about our feelings about the flight ahead and what we were going to eat for breakfast – this was Jamie’s first time on a plane. He was nervous, and a little scared but excited too, understandably. And breakfast is an important topic of conversation.

After navigating through security, giggling while Jamie was subjected to a rather thorough search from a security guard with a large metal detecting wand and feeling the excitement finally as we walked through the brightly lit duty free area, we went off to find breakfast and a cold morning beer – because you can’t go on holiday without having some sort of alcoholic beverage in the airport, even at 5am and it’s still dark out. But it was my birthday after all.

Although it didn’t feel like my birthday at this point, we were so sleepy it was all a bit surreal. I remember sitting in Frankie and Benny’s, looking at my eggs and bacon and feeling my eyes begin to close. The shops don’t open in Luton until 4.30am, so we sat near the windows looking out as the sky began to lighten and planes navigated the runways preparing themselves to soar off into the sky.

When our gate was finally called we hurried to it, because we were flying with Easyjet through Thomas Cook we were unable to check in online or reserve seats but we were hoping we could persuade some kind people to move around so we could be sat together and once we got onto the plane luckily this was the case.

On the way back we discovered we were sitting on completely different rows but thankfully the two seats next to me were empty, so Jamie could move back. It all worked out fine in the end but if you do book through Thomas Cook onto an Easyjet flight just bear in mind you cannot check in until you get to the airport or choose your seats beforehand. It might be worth paying a little more for this privilege. 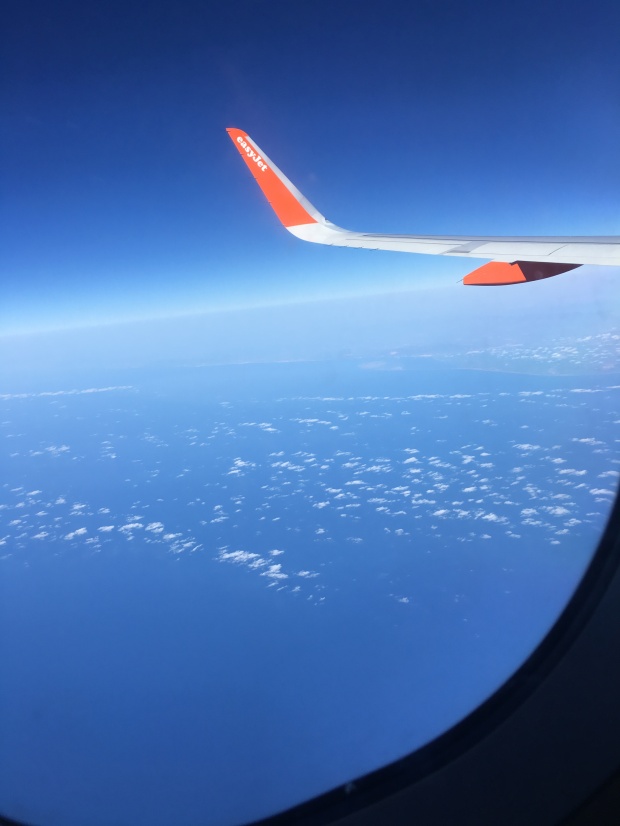 The flight to Majorca is only two hours so it passed quickly and before we knew it we were making a smooth landing into Palma airport. Thumbs up to the pilot on the plane journey there, it was the smoothest plane journey I’ve ever experienced.

Once we were off the plane there was that awkward moment of finding your bearings and the baggage carousel where you eagerly waited to spot your bag and remove it from the moving belt with difficulty. There’s always that awkward moment when you grab it and it keeps moving and you’re like ‘shit, I’ve made a mistake’ but you pull it off anyway all while trying to avoid the screaming children running around like maniacs near your feet. We eventually had our luggage safely back in our hands and headed off to find the coach to take us to the hotel.

It’s lucky I read those emails Thomas Cook sent me, because I knew which door we had to head towards (they were labelled A,B,C and D etc.) otherwise we would not have had a clue where to go. In the end we did have to ask someone for help and were grateful to sit down in the air conditioned coach once we were pointed in the right direction. After a great deal of waiting around for other passengers we were finally off.

It’s always strange to be driven on the ‘wrong’ side of the road when you visit another country and I always think I could never do it. I visited America when I was 18 with my family and my Dad drove us around in a huge rental car. We had left the airport but were lost trying to find our hotel and without thinking my Dad turned right and began driving in the left hand lane. My Mum screamed and he had to quickly pull onto the side of the road to avoid oncoming traffic. Driving the wrong way has always made me nervous since.

We finally arrived at the hotel – in good time because the coach driver enjoyed using his right foot – after navigating the winding roads cut into the mountains and the concierge was there waiting with cold drinks and helping us find our rooms. I crossed my fingers, hoping that our balcony would have a decent view and couldn’t wait to get inside, throw down my bag and pull on a bikini ready for the rest of the afternoon. I wasn’t disappointed with the view:

I wasn’t expecting a sea view room but I was so grateful when I stepped out onto the balcony. We immediately got changed and rushed off to look around, the hotel is large and we were a little lost for a while before settling on a sunbed for a moment on the terrace facing the sea, however unable to locate the pool. We decided to grab a drink (aka Sangria) and wait for the restaurant to open for lunch before heading off to find the concierge again and ask her.

The restaurant was worth waiting for. The food all week was absolutely delicious and I think I ate paella every single day. Don’t judge. I’ve probably gained back all the weight I recently lost. I don’t want to get on the scales yet. But the paella was so good I was thinking about it at work earlier today, wishing I could eat it again at lunchtime.

You could help yourself to a huge selection of dishes, as well as fresh salad, fruit and wine and beer on tap – oh yes, we had quite a few glasses throughout the week. Once we were full we spent the rest of the afternoon by the pool, went for a dip in the sea and liberally applied suncream so we weren’t lobsters on the first night.

After an afternoon of snoozing in the sun we went back to the room to change and were greeted by the concierge not soon after with a bottle of wine and a huge plate of fruit to celebrate my birthday with. I was a little overwhelmed by the kind gesture.

We headed to dinner later and tucked into the delicious buffet again, then decided to go find the Blue Bar with the rooftop views of the ocean. We weren’t disappointed with the views and treated ourselves to a cocktail. The hotel is all inclusive, but you pay for premium drinks and cocktails but for the size and amount of alcohol in them they’re a great price at 5 euros each and throughout the week we worked through the menu, sampling them all.

We were super tired though having been awake for around 36 hours by this point but managed to stay up until around half 10 before retiring to the room. But before we could go to sleep Jamie decided to get down on one knee and ask me to marry him! It was such a shock and I cried and I was so warm I panicked that the ring wouldn’t fit but it did and it was such a wonderful way to end my birthday. I honestly didn’t expect it to happen until we had the house sorted, but he had asked my family a couple of weeks before the holiday and had the ring since February!

After such an overwhelming first day, we let all our friends and family know about our engagement then enjoyed the rest of the week relaxing, reading and taking dips in the pool. Two of the first days were cloudy and it even rained all day on the Thursday but after that we got to enjoy four days of hot weather and sunshine and returned home a little bronzer.

If you are considering a holiday in Majorca I highly recommend the Sentido Don Pedro, it’s tucked away in such a quiet part of the island it’s perfect for those who just want to relax for the week.

Of course, through Thomas Cook you can book excursions and they also put on entertainment every day so if you start getting bored you can always find something to do. Archery, water polo, table tennis and killer pool were just a few of the day activities and at night the team sang and did quizzes to keep you entertained. 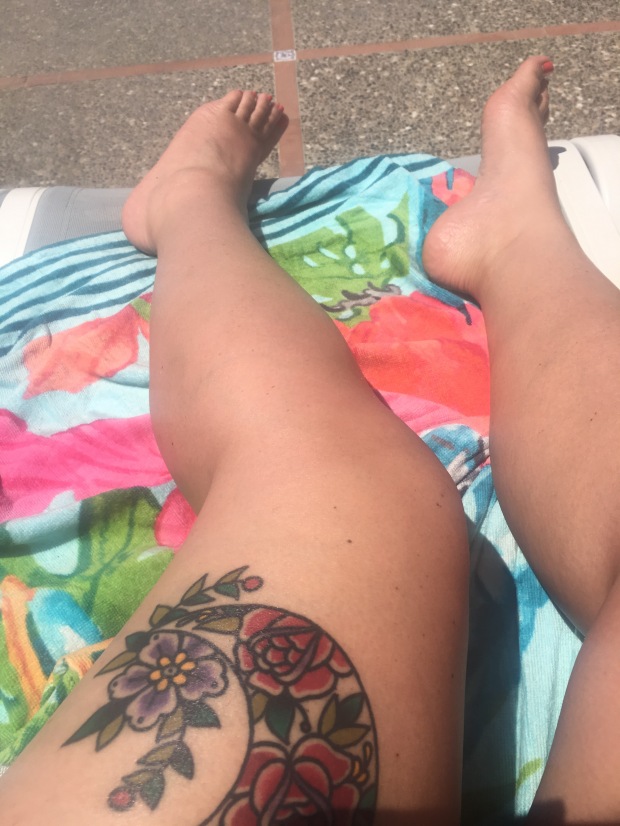 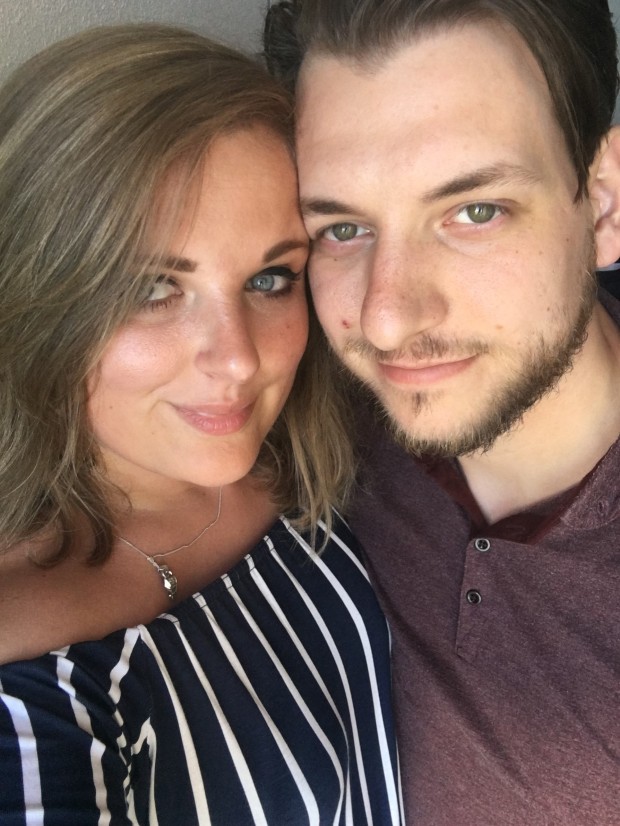 If you want to know more about the hotel or the process booking with Thomas Cook then feel free to pop a comment below or send me an email! Always happy to help fellow travelers.

2 thoughts on “A Birthday Abroad & Getting Engaged (!!) | Pugs and Dinosaurs”