I first read about the film Maggie a year or so ago, and then it completely dropped off my radar. It wasn’t until I was browsing my Twitter timeline and saw a screenshot of MCM Comic Con’s magazine today, talking about the film, that I suddenly remember how much I wanted to see it. 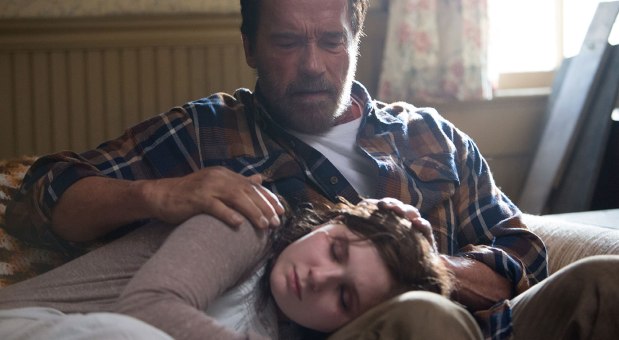 Featuring Arnold Schwarzenegger and Abigail Breslin, the film follows the story of Maggie (Breslin), a young girl who becomes infected with the zombie virus and starts to slowly change into a flesh eating creature, as her father (Arnie) attempts to protect and care for her, while coming to the realisation that he must make a decision sometime whether to send her off to quarantine or kill her himself.

There isn’t going to be any witty lines from Arnie about killing the undead nor any overly bloody scenes (at least I don’t think so) it looks to be focused on a father and daughter relationship and coming to terms with losing a loved one.

I’ve read reviews about the film which claims Schwarzenegger’s performance is weak, which I had kind of expected. However, I think that choosing him for such a part makes the film all the more intriguing and I enjoy Abigail Breslin’s performances, so that’s not going to put me off.

There’s just something about Arnie playing a dramatic role that draws me in, I hold him high on a pedestal when it comes to actors and have never thought he could do any wrong. The decision to move away from his action roles once in a while is not a bad move in my books (although I did recently watch Expendables 3 and loved his bit part in that).

I checked my local cinema’s website and they are showing it for a limited time (it apparently starts on the 24th July and finishes next Friday) so I might have to go to the cinema twice next week to see Inside Out and Maggie. Sorry bank account.

What do you think? Is Arnie capable of performing such a role?

One thought on “A zombie drama feat Arnie? Sign me up |Pugs and Dinosaurs”