The UK is home to some of the spookiest places in the world, with a smattering of houses and castles and cave systems to explore up and down the country to get completely wigged out in.

So, for the 24th day of the Halloween advent calendar, I thought I’d put together a little list of the ones I’d love to pay a visit to – that spooky tour the other day must have inspired something!

I get claustrophobic, so the thought of entering a cave system is enough to make me break out in a cold sweat, but a haunted cave system…that’s something else. The tunnel system for the Hellfire Caves was dug by hand and continues underground for around half a mile.

They were created for the ‘Hellfire Club’ to use, back in the 1700s, who were a group of elite individuals that gathered to discuss politics and social issues. Those who visit the caves say they have seen mists form in corridors, had stones thrown at them and have even heard growls.

What’s creepier than a graveyard at Halloween? Not much. And the Necropolis at Glasgow is perhaps one of the creepiest ones in the country with rows upon rows of headstones to admire and paranormal investigators have even claimed to have captured voice recordings here before. It would be a great spot to visit just before the sun sets, as the shadows creep in and you try to find your way out before complete darkness takes hold.

I interviewed a paranormal investigator who had visited this location for work, and it sounded scary. It’s an abandoned asylum, so technically you shouldn’t really enter, but when the paranormal investigators did they heard sounds like someone breathing through an oxygen mask and doors slammed behind them that they had already closed themselves. Watch the video of their investigation above. 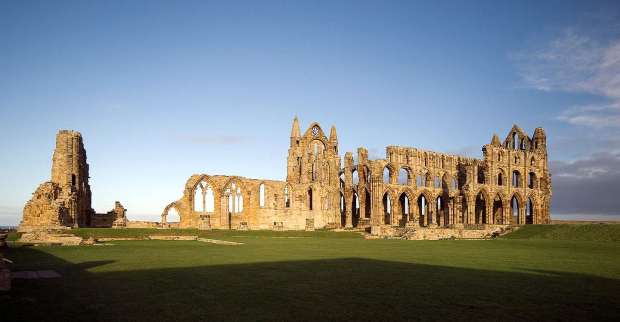 I have visited Whitby before but I didn’t get to explore it’s infamous Abbey, made famous by Bram Stoker in his Dracula novel. It’s links with the Gothic are what make it spooky, and I imagine it’s a great location to visit in the Autumn when the light is fading. As well as Whitby Abbey there is the museum to visit, which features the Hand of Glory – a mummified hand discovered in the wall of a thatched cottage. Nice.

There’s something creepy but also very beautiful about abandoned theme parks, the eeriness of the empty rides and location itself are unnerving and the mannequins and ride designs have no context when you find them broken and peeling. Camelot Theme Park, located in  Lancashire closed down in 2012 and has been left to rot ever since, it would be the perfect spot to visit near Halloween.

Which spooky location would you add to the list?