So unless you’ve been living under a rock, you’ll have seen that a new Suicide Squad trailer dropped.

I can safely say, I’m so excited for this movie. And that’s probably one of the most well put together trailers I have ever seen.

It looks like it’s going to be rammed with action and introduce to a lot of villains and characters from Gotham that we might not have got to experience yet on the big screen (Gotham is doing a great job of introducing them in the show and I’m getting to see characters I’d never heard of too).

I haven’t read the Suicide Squad comics so I don’t know if it’s going to stay true to any storylines but the trailers haven’t given away much in terms of who they’re fighting although I’m guessing The Joker is behind it all. I am interested to see Harley and Joker’s interaction and I’m assuming the film will reveal Harley’s acid experience from a shot in the movie, kind of staying true to her origin story although we all know she fell in love with him way before that incident.

I have to admit, DC is really climbing back up on its feet and starting to act as real competition for Marvel. Of course, Christopher Nolan’s Batman series was excellent but besides that what have they had to offer? Superman? Yeesh. Although now that Batman’s been added to the mix, Henry Cavill’s Man of Steel doesn’t seem like such a simpering wreck. Plus, Wonder Woman has been thrown in there, and we have the Wonder Woman movie itself to look forward to.

I think DC is adding more strong female characters into the mix, with Harley in Suicide Squad added to the mix. Marvel, while it does have Black Widow, really isn’t taking full advantage of its strong female arsenal as we’re still experiencing male dominated movies (in the next year it’s of course all about Captain America, Iron Man and Deadpool) with Jessica Jones attempting to up the girl power, but in future months/years we’ve still got the Civil and Infinity Wars, Dr Strange, Black Panther, Captain Marvel and another Ant-Man movie (okay, yes he does have The Wasp supporting him), all coming up in one giant cock fest.

Hey, when did this post turn into a feminist rant? Who knows, but let’s roll with it.

There are so many female characters with incredible stories to tell – on the big screen, not just on Netflix. For one, a Gotham Sirens movie would not be rejected by me – Catwoman, Ivy and Harley Quinn causing havoc would make quite a show. You also have characters such as Raven; brooding, mysterious with great power and a troubled past she would be amazing in a leading role.

Marvel wise, Spider-Woman needs a film. How many Spider-Man reboots are we going to endure before they realise Jessica Drew is kick ass and deserves to have her story told? Or, what about a film about Spider-Gwen? You could have so much fun with her character and feature her in the band she’s in The Mary-Janes (of course, featuring none other than Spider-Man’s former beau Mary-Jane – also known as Em Jay in Spider-Gwen’s universe – Watson). 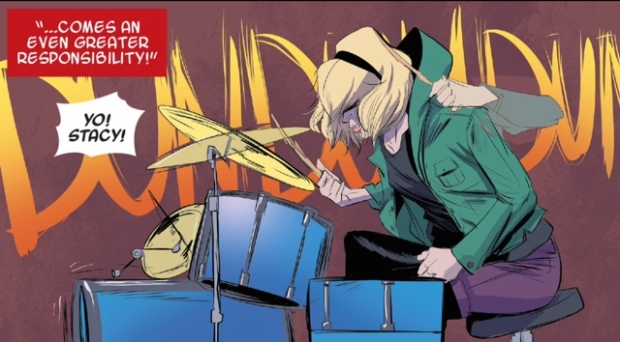 Look, does anyone have a phone number for a top film exec in Hollywood. Cause’ I’ve got lotsa ideas puddin’.

What do you think to the latest Suicide Squad trailer? And the whole lack of female lead characters in the Marvel/DC films?