This blog has taken a step back so far this year, as I plan on moving house in a couple of months and begin packing everything I own up into non-descript boxes that don’t reveal what fun things they hold inside. I have however found a little time to make my way through a game which has sat on my ‘to play’ list for a long while now. 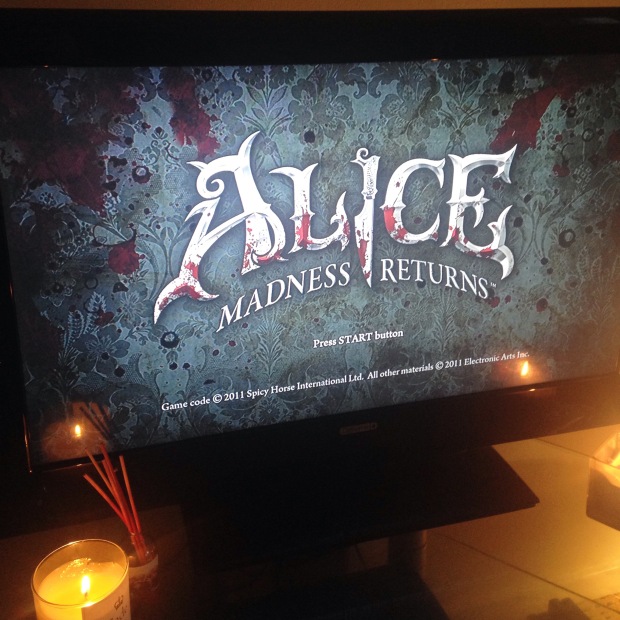 I love the look and style of the animation and I’ve always been a huge fan of any Alice in Wonderland adaptations. I hadn’t realised just how dark the game actually is, with Alice’s madness fueling the negative reactions from the characters she interacts with in the real world and her coping mechanism of entering Wonderland when it all gets too much.

However, her Wonderland is crumbling and it’s up to her (aka you) to fix it. The usual characters from Lewis Carroll’s much loved stories feature throughout the game but are warped, horrifying versions of their former selves due to Alice’s madness, fueled by her guilt over a fire in her home as a child that killed her parents and sister. As the game goes on and you collect Alice’s fragmented memories you come to realise that you are not the one to blame for their deaths.

The game isn’t my usual choice when it comes to  gameplay, there’s  a lot of jumping which can be very frustrating at times if you hit a button wrong or move slightly in the wrong direction and there are lots of puzzles to solve and navigate before you can move on. However, the underlying story and Alice’s retrieval of memories makes this gameplay all the more interesting.

Alice herself isn’t particularly a likeable character though but I think this is partly due to what you hear others say about her. Set in Victorian England Alice has that absurd disconnected outlook on the world, she is not emotional and therefore hard to relate to and the way she talks down to other character’s is frustrating in cut scenes. However, I recall feeling this way while reading Carroll’s novels, I never particularly liked Alice.

Back to the gameplay, besides the jumping and puzzles Alice can fight enemies as she makes her way through Wonderland. Her first weapon of choice if of course the Vorpal blade which we know of from the Jabberwocky poem. This is great if you like to button bash and hack and slash enemies like me and this weapon is particularly effective. You can upgrade your weapons, paying with teeth that you pick up throughout your travels.

I actually love the concept of the teeth in the game, as we all know they are strongly related to dreams and many of us have experienced that horrifying dream where our teeth fall out of our mouth at a bad moment. 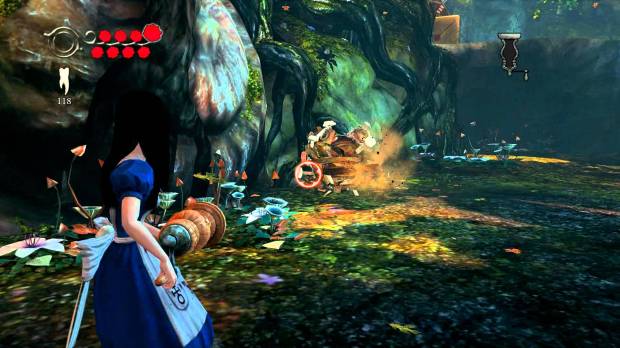 Another weapon is the pepper grinder, which is effectively a grappel gun that quick fires at enemies. You don’t run out of ammo while using this weapon but it does overheat and there is a cooling period to consider while fighting something. Another gun style weapon is the teapot cannon, which is much more effective but requires charging before firing by holding down the X button.

My favourite weapon though has to be the hobby horse, it’s a melee weapon and one that breaks through enemy’s defences to prove more effective than the vorpal blade although you can combine both weapons in an attack for increased effectiveness.

The hysteria element of the gameplay is a great bonus while fighting enemies, if your health gets to a certain low point you can hit L3 which takes you into an altered state that enhances your attack and ability to withstand damage. It’s a great last stand element to the game and one that I’ve enjoyed using once or twice.

Alice’s costume changes are another fun point that I thought I’d mention and each costume links to the level you are playing. I am currently working through a Japanese themed level and Alice is wearing a quite pretty floral kimono style dress. For the under the sea level she wears a dress that resembles a jelly fish, with an angler fish light hanging from her bow at the back. These little details are what enhances the game and make up for its disconnected style of gameplay.

To explain, I’m not entirely sure what is happening in the real world for Alice, she appears to be living in an orphanage having therapy with a doctor but there’s also the possibility that she worked in prostitution and that there is a solicitor attempting to rob her of her inheritance but before you can get answers she is transported back to Wonderland.

There is a lot more to say about this game so I think that when I have completed it I will do a part 2 thoughts piece on it and go into some detail about the enemies and themed levels.

While I haven’t finished Alice Madness Returns yet I wanted to share it on the blog today and encourage anyone who hasn’t given it a go to try it out. It was on offer for £3.99 on the PS store when I purchased it, which I think is a steal considering how fun it is to play.

Let me know what you think!