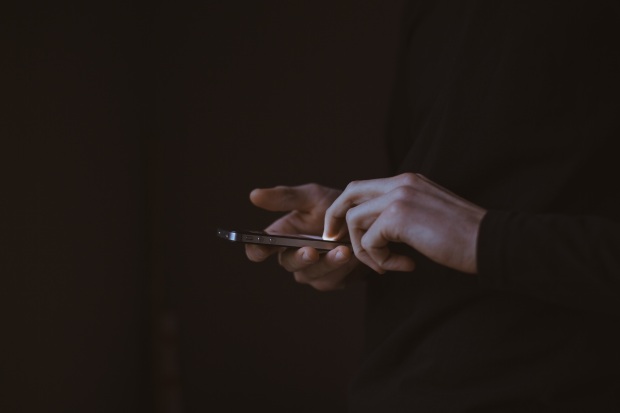 I started this horror piece the other day after receiving a text message out of the blue from someone I hadn’t spoken to in years. It made me feel a little weird and then my brain went off on a creative tangent and I came up with this. There is more than what you can read below, and it will get creepier.

It all started ten days after the funeral. I was sat, alone in my living room with the lamp on, staring at the television but not really taking in what I was watching. It was late so it was probably a rerun of Peep Show or some other obscure comedy programme. I hadn’t finished my glass of gin and lemonade. I could still hear the bubbles fizzing next to my left ear, getting quieter and quieter as the carbonated drink went flat.

I held my phone in my lap, one hand loosely keeping it in place. People hadn’t stopped calling, texting, turning up at my door uninvited. I wanted to be alone. I wanted to take some time out, I’d finished with the funeral planning and the hugs and the sympathetic glances. I’d locked my door and didn’t intend to leave until I couldn’t stop thinking of her. Until I’d stopped seeing her face every time I closed my eyes. Melanie.

I hadn’t slept in our bed since that day. It was still unmade, dressed in the chevron print duvet she liked. The scatter cushions strewn across the plush rug she kept on her side of the room. Her makeup was still spread across the dresser table. Like she was just going to go and sit down and start applying primer to her face, rubbing foundation across her skin to hide the blemishes she thought existed and draw her eyebrows on. She would always pick up a small, compact mirror to do her eyeliner and I would watch in awe every morning as she applied a long, black flick in one smooth movement across her eyelid.

Sometimes she would apply too much and blink and get a wet black smudge on the crease of her eyelid. She’d usually curse and pull out a baby wipe and remove it. I’d noticed that the baby wipe packet hadn’t been closed properly since the last time she used it. They had probably started to dry up. She used to get infuriated when that happened.

She was hot and cold, one moment she’d be docile as anything, happy and calm but then something would happen, usually something small and she’d flip. She’d slam and curse and her mouth would do this angry pout that I liked to tease her about. I’d try and hold her sometimes when she was like it but she’d stiffen up and shrug her way out of my grasp. She was a handful but I loved her all the same.

She didn’t like saying I love you though. She wasn’t one for emotions and hand holding. She liked to go out, get drunk then head back to ours for rough sex. She was fun and wild with her red hair and her cat eyeliner and her tattoos. She had twelve in total, inked onto her skin. They were the only reason I could identify her body.

I knew she loved me though, sometimes in the night her cold, thin legs would push themselves up against the back of mine and her naked body would shuffle across the mattress to rest against my back and one skinny arm would reach over my side and hold my hand.

I could never tell if she was doing it consciously or if she really did cuddle me in her sleep but I didn’t complain all the same. If I thought she was in a deep sleep after a few minutes I would carefully turn over, keeping her arm where it was and her knees in a foetal position and lie to face her. The street light outside always kept our room dimly lit and I’d watch her little mouth as she breathed deeply, her top two teeth resting on her bottom lip and notice that her breath still smelt of mouthwash.

I didn’t use mouthwash, so that would just sit on the bathroom sink forever more until I had the heart to throw it away. The rim still had a lipstick stain on it where she’d been getting ready for an impromptu night out and at the last minute had forgotten she hadn’t brushed her teeth. She’d run back up the stairs and into the bathroom, using the mouthwash instead. It was one of those ones that showed you the plaque when you spat it out. She was always gross and told me to look when we were brushing our teeth at the same time before bed.

I sat there, ten days after the funeral thinking about brushing our teeth together and how I should probably brush mine when my phone lit up. Thinking it was probably another well-wisher, checking up on me, I looked down and there it was. A text from her.

That’s all it said. I’d placed a heart emoji after her name in my phone, just to wind her up once, but looking at it now on my screen I felt sick. The screen went black again. I couldn’t move. I could only look in horror at the device in my hand.

A minute later it lit up again. To remind me that I had a text.

Such a simple phrase but one that made my stomach feel like ice had dropped into it. Like I was on a fairground ride that had an unexpected drop. Like that moment when you’re riding in an airplane and you hit an air pocket and then the seatbelt sign comes on.

I needed a seat belt right now. I needed something to stop me from reeling.

The screen had gone dark again.

You’re dead, Mel. I thought to myself. You’re dead.

I pressed the home screen button. The text was still there.

Someone is playing a really cruel joke. I thought. Someone must have her phone and is trying to wind me up.

At first I thought it might be her brother. He had always hated me. But he had taken her death just as hard as I had, so for him to do this it just didn’t seem possible. I unlocked my phone. Ignoring the red notification symbol on my messages, I hit the call button and found Melanie’s Mum’s name. I needed to check where her phone was.

For some reason, the thought of pressing that phone to my face with that unread message on it made me feel strange. I had to open it first.

I hadn’t deleted our past messages to each other and it felt strange to see such a huge gap between the dates, between our last correspondence and that strange hello.

I noticed my hands were shaking. My thumb poised over the keypad. Whoever it was wouldn’t know I’d read the message, because I had turned off that setting, but they would see me typing back. I could only stare at the screen.

The last text she had sent had asked me to come and pick her up. I’d dozed off while waiting for her to message and missed it. I’d woken an hour after she had sent it, thinking shit over and over and had hurriedly tried to call her while pulling my shoes on.

Who is this? I quickly typed, my thumb hovered over the send button but I made myself hit it. I watched the message send and felt my heart beating in my chest.

Three dots instantly flashed up on the screen in the bottom left corner. I felt sick. Someone was typing back. I could see that they were putting words into a message box, someone was on the other end of my question. But it couldn’t be Melanie.

Who is this? I quickly asked again. I wanted them to respond. I wanted to know who it was so I could find them and punch them in the throat. This shit wasn’t funny.

I stared at my screen for a long time. Every time it went black I would press the button again. I did this until my eyes kept shutting on themselves and my shoulders felt tight from sitting in the same upright and alert position. Eventually my body couldn’t hold out anymore and I fell asleep. The battery had also died on my phone.

One thought on “Creative Writing | The Messenger | Pugs and Dinosaurs”