I’ve written before on this blog about how excited I was for Fallout 4, a game obviously created by the developers Bethesda. Now I’ve played Fallout 3, I’m going to be honest – that game and I did NOT get along. I tried to do a series of commentary posts while playing it, but in the end I put my controller down and said ‘no more’.

That’s why I’ve been quiet about Fallout 4 lately, mainly because attempting the third game has just put me off the franchise completely. I know, I know, I shouldn’t have got excited before playing the game but after watching the E3 trailers I was like wow, this looks amazing and so I naively popped Fallout 3 into my PS3 to play before the next game came out.

That’s what a lot of people do, right? I read somewhere that like 84% of PS4 owners have never played the Uncharted games, hence why they just released the remastered trilogy again to get them interested (because they’re not releasing it on the bloody PS3 and need people to actually buy the fourth installment when it comes out. Oh yeah, and I also don’t have a PS4 yet because I’m adulting hard at the moment *sobs*)

So, trying to play Fallout 3 was the most frustrating experience ever. Every time I left Megaton I’d get killed by something that was about 20 levels higher than me and I’d be confused as to why the game would allow that to happen. I mean, I was level 1, just leaving the safe zone and the AI springs something like that. No.

I’m also not great with open world concepts, I like a little guidance but Fallout 3 just left me feeling a little lost and so I retired the disc to its rightful place – back in the box.

Jamie and me were in town a couple of weeks ago, in our usual haunts (CEX and Game) browsing the discount games and I spotted Skyrim. Jamie is a huge huge fan of the game so I picked it up along with Borderlands 2 and The Last of Us – which is amazing by the way, I wrote a review that you can read here.

I took Skyrim home and popped it in the console. I didn’t once think, hey this game is made by Bethesda and is probably just an oldy worldy version of Fallout. The first thing I actually thought once the game started was just how mediocre the graphics were, now I know Dragon Age Origins is no wonder but I expected more from a game people full on rave about and which has a sort of cult following. Although I have to admit the landscapes are quite pretty.

Next came the stunted commentary from the characters, the lack of direction when shit went down and just general confusion. It’s cool, I thought, when I first played Dragon Age Inquisition I was like ‘what is happening right now?’ in the first 20 minutes of the game. 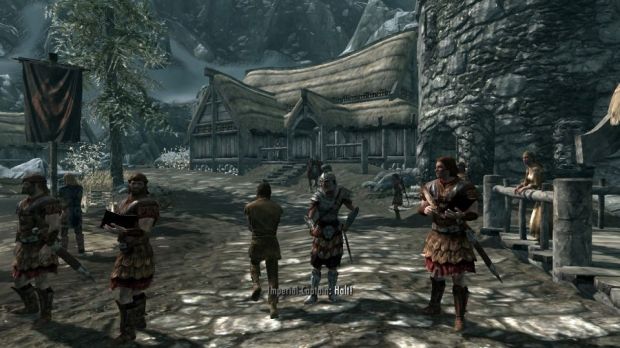 One redeeming feature is this brilliant moment: ‘You can’t kill me!’

Then, once I’d escaped the dragon and had chosen to team up with the Imperialists I discovered I couldn’t save my game. A quick Google told me that this was a common issue and so I had to complete that whole first level again. Needless to say I was pretty frustrated. I can’t deal with having to go back to the beginning again, hence why I will never play the Dark Souls games.

So, I completed that first level again ploughing on and maybe started to have a little fun. I ended up going for the Dragonstone mission and made my way through the Bleak Falls Barrow in the mountain. I reached the final Draugr, killed it and before my very eyes it’s ugly lifeless body sunk through the floor, where I was unable to loot it for the bloody object I’d entered the place to find. I just sat there, controller in hand, staring at the screen in disbelief that I had just completely wasted around three hours of my life getting to this point for me to have to do it all again.

But do you know what I did? I re did that level. I carried on, I saved every ten minutes, I reached the moment when I discovered I’m Dragonborn and do you know what happened then? It glitched on me again, it didn’t save my last level up progress and by that point I was so beyond done with it.

You might laugh in my face at my reasons for refusing to play the game, but anyone who knows me understands I seriously lack patience. And this is why I hate Skyrim, because it is the glitchiest thing I’ve ever played and when it starts affecting my abilities to move on with the game I’m throwing that controller on the floor and shouting ‘nope!’

Maybe it’s just the game on the console? I don’t know, but like Fallout 3 it has been retired to the ‘games I will probably never play again’ pile which also includes The Orange Box and Enslaved (which actually isn’t a terrible game but not one I’ll ever play through again).

I can’t put time and effort into a game that appears to be so clumsily created in parts that it’s impossible to play smoothly. It’s not fair on the player and it’s an issue that should have been ironed out by now. I mean, the gameplay itself wasn’t bad, I found the assigning weapons a little clumsy and the levelling up system is a slightly confusing one but I suppose if you play enough you quickly get used to it.

I wanted to love it, I wanted to play it for hours but I don’t have the patience for the glitches and not knowing if all my efforts are going to simply go to waste when I go to save next. Who knows, maybe out of desperation one day after re playing Tomb Raider for the 20th time I’ll pop it in again.

Obviously this post is based on my personal experiences and opinions but feel free to let me know in the comments why these games are worth ploughing on with! I’m all ears.