On Friday I finally got to enjoy one of my birthday presents that I’d been waiting for since July: a trip to the Harry Potter Studio Tour, based on the outskirts of London.

If you have not yet visited the studio tour then there are some spoilers about what you might find there below, but if you are a true Potterhead and have seen the films repeatedly you should know what to expect. 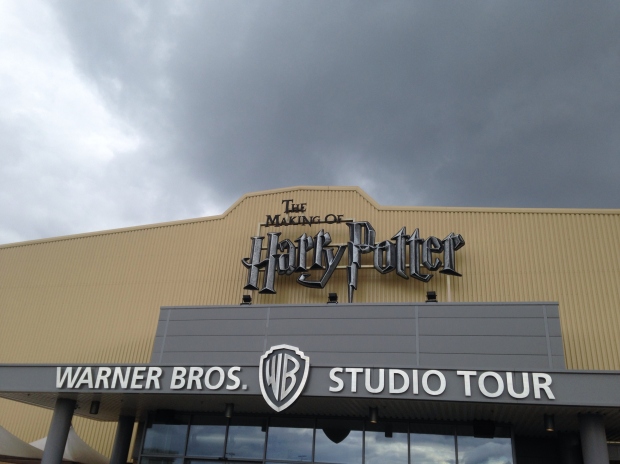 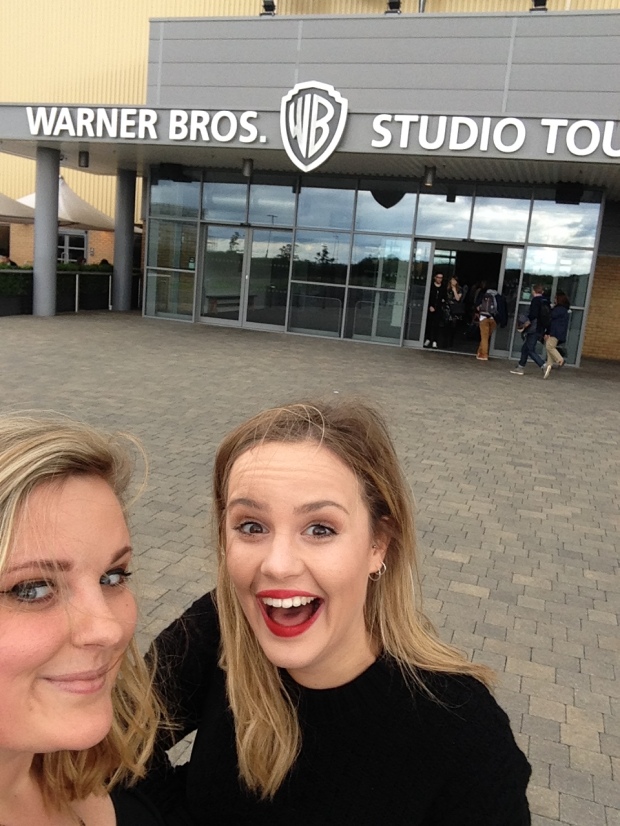 As you can see, my sister and me were pretty excited about the whole thing. She bought the tickets even though she is a poor student and I drove on the day (which actually wasn’t as stressful or horrifying as I initially imagined it might be.)

The building itself doesn’t give anything away about the magic inside – and I am not overexaggerating when I say magic. As a big Harry Potter fan I have to admit I felt a little emotional at times and overwhelmed by what I was seeing.

We arrived around an hour before our booked slot, which gave us time to grab a sandwich from the cafe near the entrance and have a little browse in the gift shop. I’d recommend arriving a little earlier, then you can pick up a digital guide and get in the entrance queue nice and early. 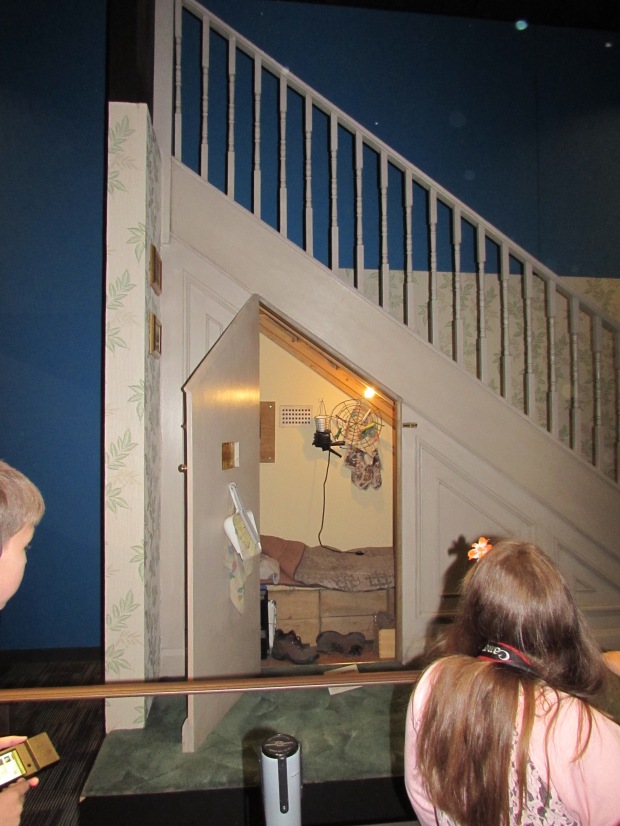 Harry’s cupboard is one of the first exhibition pieces, you can look at while waiting in the queue 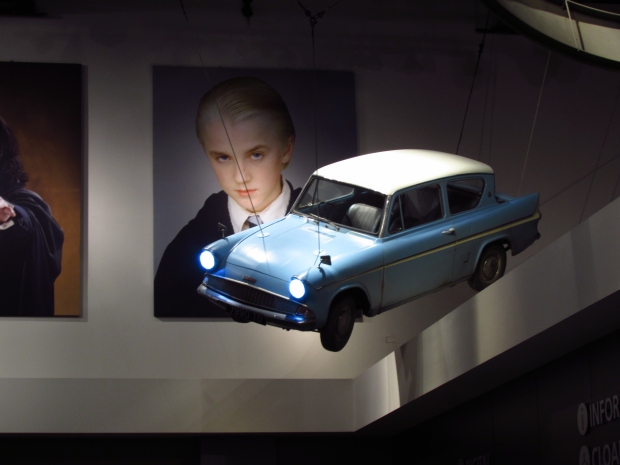 Once you’re let through you will find yourself in a darkened room where a short film will be played before being taken through to a seated cinema where another short film featuring the three main stars talk to you about the process of making the movies and then the screen lifts to reveal the Great Hall doors, one of the first moments I felt a little emotional.

The Harry Potter stories were one of the first book series I truly immersed myself in and my Grandma would buy me the new hardback copy of the book when it was released, pre ordering one for me and one for herself. She included my sister as well when she was a little older. The books I own can’t be found anywhere else now and I won’t be letting them go anytime soon. 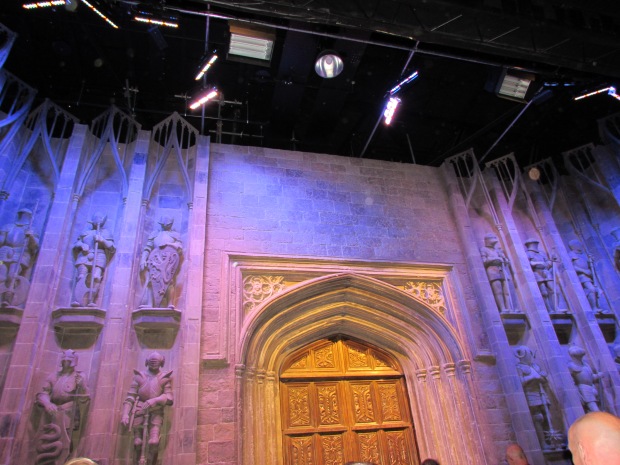 One of the great things about the tour is that you are free to take pictures pretty much everywhere and of everything, except in green screen areas and cinema rooms. I was expecting a lot more restriction but once you go through the doors you are free to go wherever you like and take as long as you fancy looking at things.

The average time per visit is around 3 hours, we went in at 1.30 and emerged at around 4, leaving for the A1 at around 4.30 after spending far too much money in the gift shop. There were a few things I wanted but couldn’t quite afford all at once, so it’s good to know that there is an online store too. 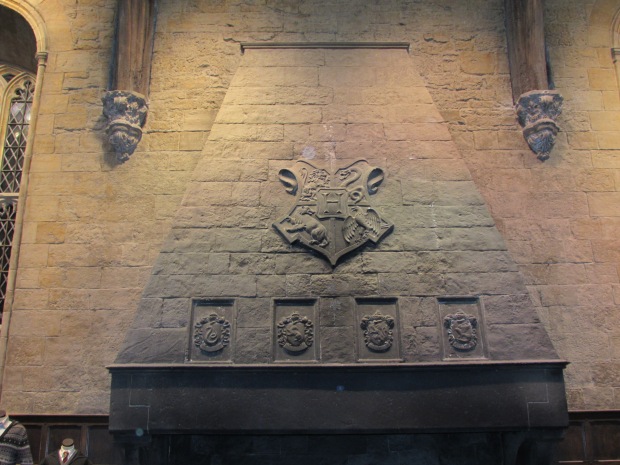 The great hall set was created using not stone but wood and resin, however the floor was put together using flagstones 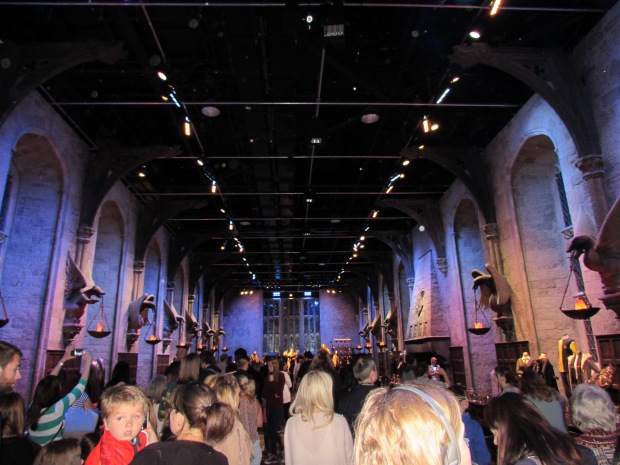 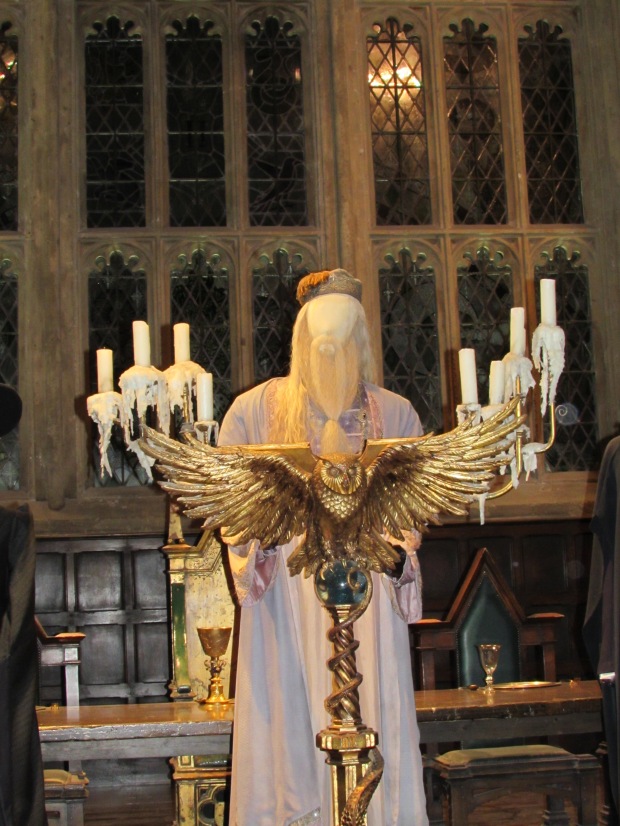 The pictures I took came out okay but be warned, people will just walk in front of you and your camera, even when you’re trying to take pictures of other people in front of things. There were a lot of Slytherin types walking around on that tour. 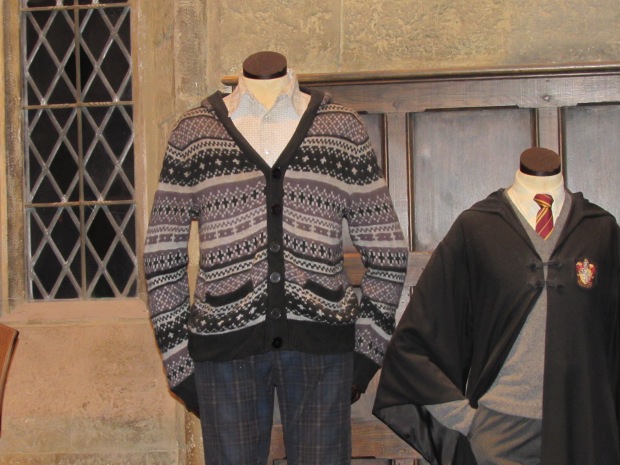 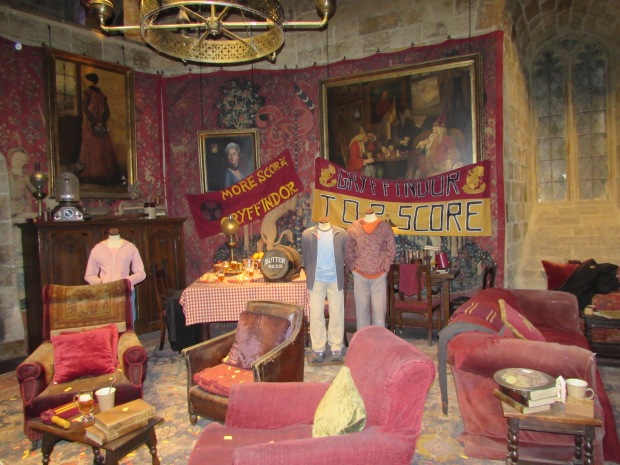 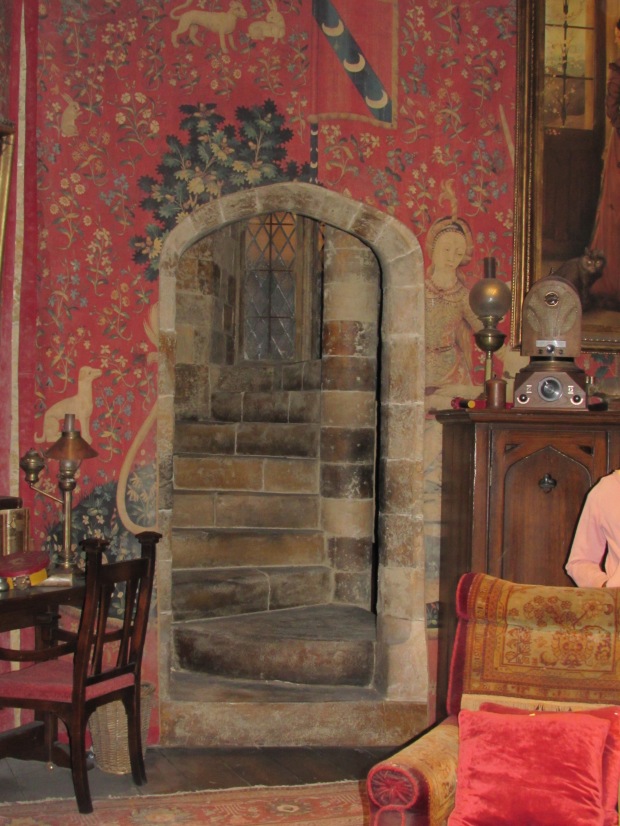 It was so strange, seeing props and costumes that you recognise from those much loved moments in the films, right in front of you and it was also incredible to see just how real they looked. The entrance to Dumbledore’s office was one of my favourite items on display and looked like it had really been carved from stone or bronze. The prop designers are the real wizards when it comes to the films.

I don’t have any pictures of the green screen areas, mainly because you can’t take pictures in there but I have a couple of helpful tips should you decide to climb on a broom and have a go.

It is great fun though, there are other opportunities with green screens later such as by the Hogwarts train (which is incredible) which allows you to sit in a carriage and see Dementors flying outside the window. 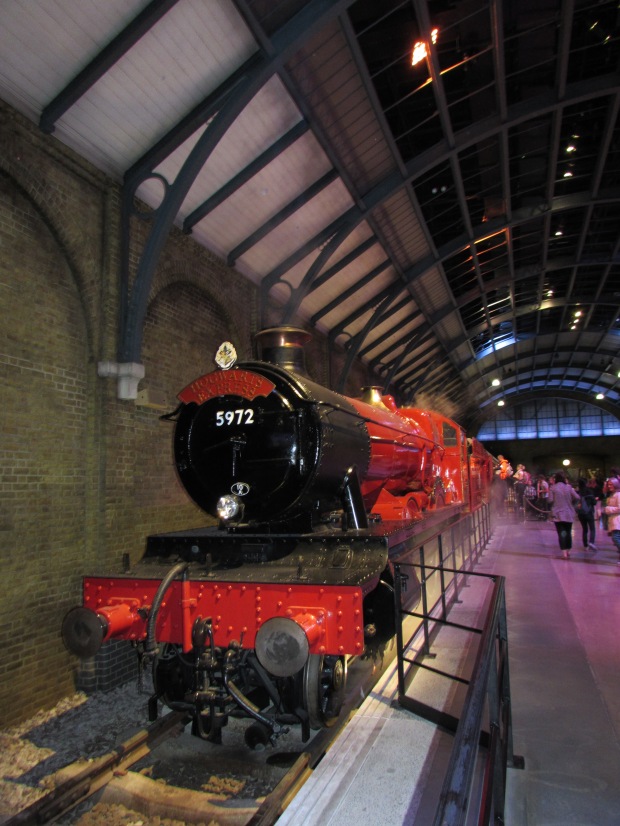 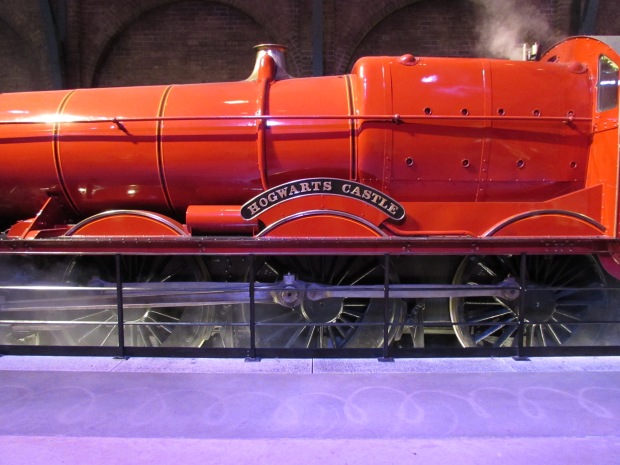 After seeing the train we then went through to go and grab a Butterbeer, which I have to say is the strangest thing I have ever tasted. It is basically a sweet fizzy pop with a layer of toffee/butterscotch flavoured froth layered on top. I mean, I drank half of it but I don’t think I would buy one again. 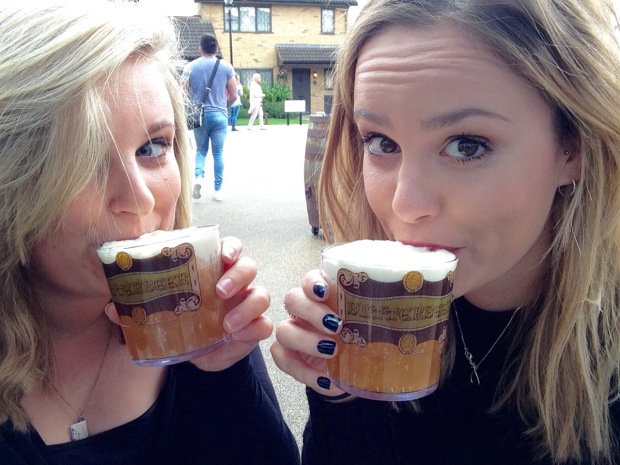 We picked up souvenir glasses, to take home and there is somewhere to wash them out so you don’t have to put sticky tumblers in your bag. We sipped our strange tasting beverages outside the Dursley’s house and the iconic Hogwarts bridge. 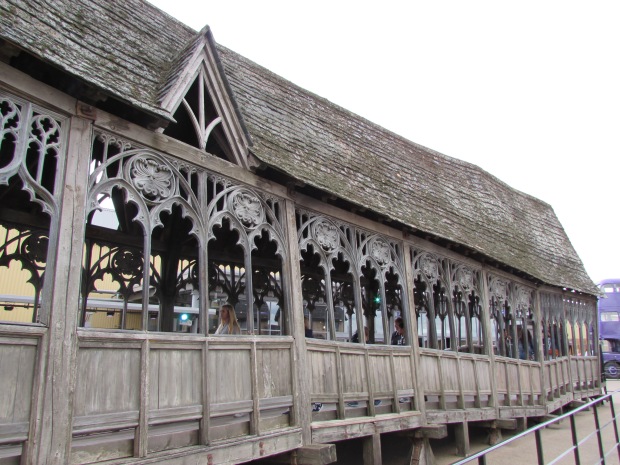 If you are a true HP fan and still haven’t been to this studio tour I can’t recommend it enough, to see everything in the flesh and up close is an incredible experience and will make you want to run home and read all the books again and re watched all the movies.

Here are my favourite parts of the tour: 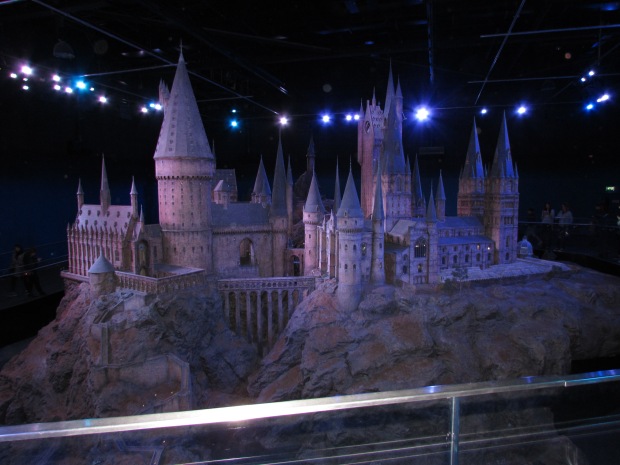 Once you have walked through the Diagon Alley set you will turn a corner and find this huge replica model of Hogwarts before you. I actually gasped, it was incredible and screens surrounding the exhibit showed you how they used the model for the sweeping landscape shots and flying scenes that took place around the castle. 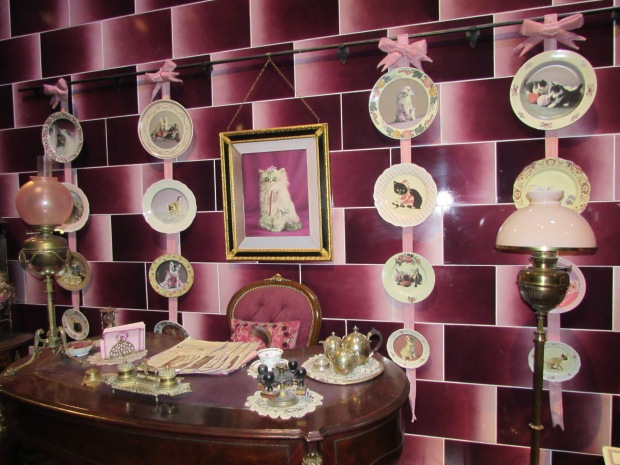 Of course we all hate Umbridge but her office was pretty fantastic. The kittens on the plates were actually purchased by the prop creators and photographed and filmed, so the moving images you see in the films were actually shot for purposely for the movies. The kittens were re homed after production, so people out there own cats that starred in the films! 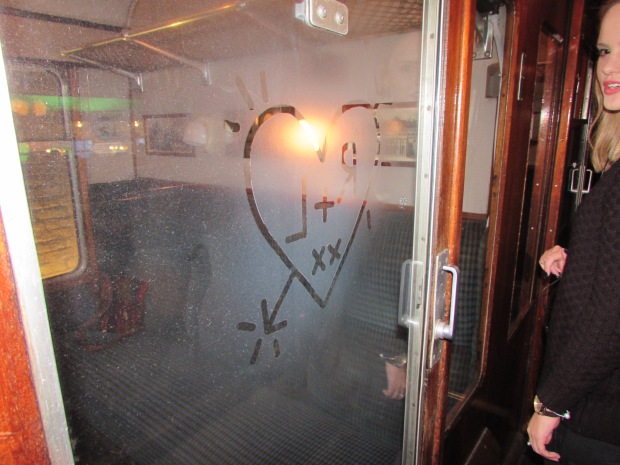 The prop creators fashioned each carriage on the Hogwarts train to feature something iconic from the films. My favourite was the Lavender Brown glass message, which also made me a little sad considering her character later dies. I know, I know, she isn’t real.

Have you been to the studio tour? If so, what was your favourite part?