Tyrande Whisperwind cosplay by Rathalely Cosplay Photography by The WinnTeam

When I came across Lesley, the one woman force behind Rathalely Cosplay, while searching online for an article at work, I was mesmerised by her skill at putting together costumes. I’d seen impressive cosplays before but when looking through her Facebook page it really puts into perspective the time, dedication and craft that goes into creating a cosplay that looks like the real deal.

Cosplaying is actually still a side hobby for Lesley, although you wouldn’t think so to look at her costumes, which are put together with such careful consideration that you could believe a professional had worked on them.

I spoke to her about her costumes, how she became involved in the cosplaying scene and what she enjoys in her spare time, when she’s not manically pouring latex into moulds or cursing a sewing machine for jamming: 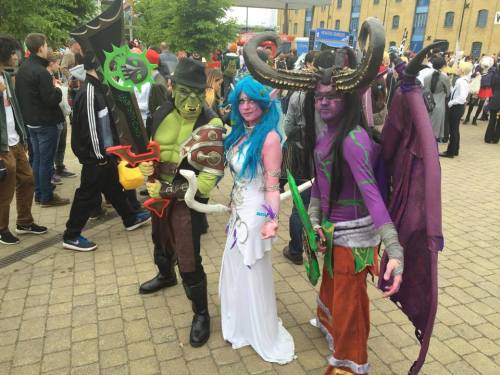 “Believe it or not, I never used to have any form of artistic skills!” Lesley told me, “I couldn’t draw anything! When I was 14, I taught myself to draw band logos, and when I started watching anime at about age 15/16, and I then began drawing anime. I was terrible at first, and then just got a (little) bit better!

“That’s how I’ve been with cosplay, from being 100% ‘Oh god why did you even do that?!’ to ‘I’m quite pleased with that!’ There’s definitely still room for improvement (my sewing, for sure!) but I have self taught myself everything.”

Her Tyrande Whisperwind cosplay is a good representation of just how much time goes into a costume – you can see the whole WIP album here – and involved multiple latex castings, sewing, wig styling, clay moulding and make up. (And here’s me thinking that painting my forehead black with eye shadow and saying I’m Furiosa is a good cosplay.)

Lesley is so modest when it comes to her skill though, considering she only started cosplaying back in July 2013, she’s come a long way since then. “I’d always wanted to go to a comic convention,” she said, “I finally got the chance to go in 2013! I knew that everyone was going to be dressed up, and didn’t want to feel left out, which is why I got my friend to make my first ever outfit for me! Ever since then, I’ve made my own costumes from scratch.”

“I think when you see an amazing costume, or a character you love, that’s what brings people together. I’ve seen so many children run up to Disney princesses or superheroes getting so excited to meet their idols, and it’s so so sweet!

“I’ve had people thank me for wearing a costume before, I’ve had people come up to me and tell me my outfit is amazing, and you just generally start chatting! I’ve made alot of friends via comic cons, and I’m so glad to be a part of the community, and have them in my life!”

Lesley recently came back from Kitacon and I asked her for some tips for those who are planning a cosplay and attending a convention later in the year. She told me, firstly,”If it’s your first costume, plan way in advance.

“Don’t try and do a last minute job like I do (most conventions) because you’ll regret it. I have a friend who got upset recently about her outfit arriving from eBay and not fitting her, but she’s found a way to sort it! Some outfits on eBay need custom making to your size, and can take a long time, so if you want to order your outfit for the first time, please make sure it’s in advance.

Lesley recommends taking along these three things, to your next event planned in the calendar: “For me, as my outfits include armor nowadays, I tend to make sure I have a drink, some things to fix my armor with, and my phone to get awesome selfies with other people!”

So I wanted to know what Lesley enjoys besides creating cosplays of her favourite characters? She said: “Oh god, I basically love Valve games! One of my favourite games is Portal! (I even named my pet Wheatley from Portal 2) however, I’m quite excited for Fable Legends, as Fable 2 was the first game I ever got addicted to!”

“I don’t usually watch a lot of movies, but I do love the Hunger Games series, and can’t wait for the final movie this year! I do enjoy Spider-Man, Corpse Bride, Leon: The Professional, and there’s a few more, again, but I’m more of a TV series person!”

Lesley will be attending Yorkshire comic con, Eurogamer Expo and London MCM this year so be sure to follow her page and keep an eye out whatever incredible costume she puts together next!