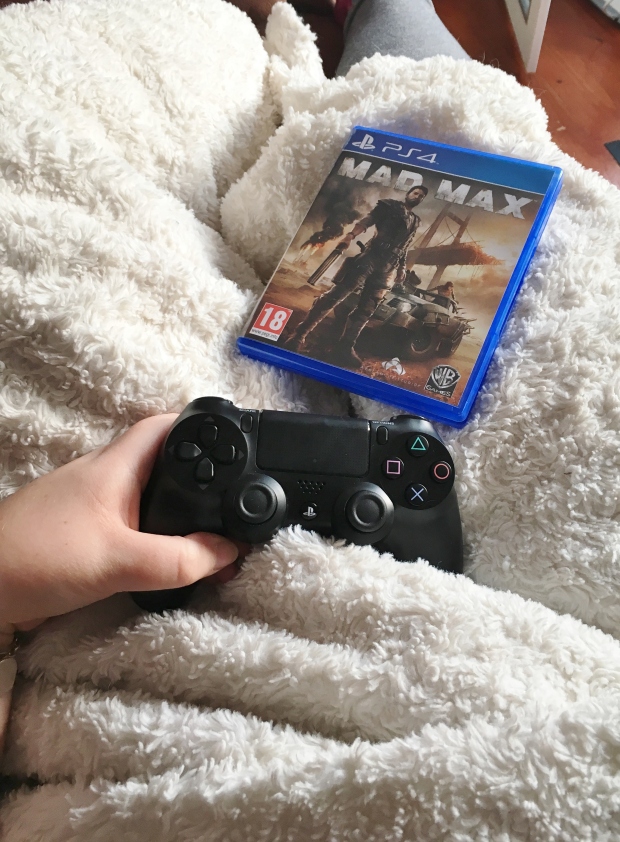 I’d heard mixed things about the Mad Max game but the trailers had kind of intrigued me. It looked like an apocalyptic Grand Theft Auto, as you suit up your car and kill people.

It’s not quite the same, but there is a lot of driving and a lot of fun melee fighting – kind of like the Batman games but not as slick. I’ve played around two hours and feel like it could be quite a big game. Today I thought I’d put together a little initial thoughts post and then perhaps an updated review later.

Everyone knows the Mad Max story, right? The Aussie loses his wife and child and basically goes a bit mad, fighting those weirdo wastelanders and driving his suped up car around. There’s Tina Turner thrown in there somewhere but I don’t think we’ll be seeing her in the game.

So far, so good. The opening cut scene is a pretty terrific one to be honest, with car chases, shooting and plenty of blood. At the end of it all you (Max) are left with nothing and you must start the game scavenging from a dead body in the middle of the wasteland. Then you come across a mutated guy called Chumbucket (LOL) who thinks you’re the next Messiah for some reason and offers to make you a badass car. Of course, you agree.

I’d also like to add, the bad guy’s name is Scrotus. Yes, I sniggered.

So, the first mission is a fetching items one. ‘Go and get me some wire so I can fix you up a car’ jobby. But once the car is sorted you’re then driving around shooting people’s petrol tanks and scavenging areas off road. I’ve just reached a waypoint where I’ve met the leader of a settlement of people who I’m trying to convince to help me take on the guys guarding Gastown, where all the y’know gas is. I’m guessing if I now do something for these people, they’ll give me a hand.

I have to say, I get strong Uncharted vibes from this game. Not only was the opening area pretty to look at but you’re playing with a good looking male protagonist. The rest of the open world is bleak – lots of dry landscapes and sand – but when you get up higher the views are pretty stunning.

Graphics wise, it’s pretty good. But there isn’t much you can do with the environment when you’re dealing with a world set in a post apocalyptic future.

The gameplay follows a traditional open world style narrative, with one main story arc that you can simply follow with additional side missions along the way. At the moment I’m attempting to knock down all of the enemy’s markers and take back some territory from them. I’m assuming the less territory they have the less of a threat they are when driving around.

When it comes to ammo and loot, it’s pretty scarce. You literally have about three shotgun shells at a time so you mostly fight melee when you come across enemies or mow them down in your car.

The environment isn’t that interactive and you can’t even jump up on ledges and stuff unless there is a ladder of sorts. The car is the main focus of the game, the reason you’re doing what you do and the idea is to get it so beasty that you can take on Scrotus’s (snigger) men and attack Gastown.

The game also has a ‘survival’ element to it, with the things you scavenge contributing to your health and abilities. Water is used to heal your life bar and must be collected in your canteen from certain points on the map, while when you get peckish you usually have to find some dog food to snack on. Delish.

You need to also keep your car fueled up via fuel cans you randomly find, filling the car up and keeping a spare can in the back like your Dad on a long road trip.

As you explore the map and locations you also come across old photographs which appear to feature memories from Max’s old life. I can’t tell whether these are real or if they’re going to lead up to some psychotic episode, they could just be collectable items like relics in Tomb Raider or Uncharted.

So far, I haven’t found any glitches while playing – which is great considering I just finished Rise of the Tomb Raider and that was mega glitchy in places.

The control system is a little out of the ordinary. For example, you aim with L1 and shoot with Circle, I’m so used to shooting with R1 or R2 it took a little while to make the transition. Melee is the same button as usual though, using square, perfect for bashing in tough situations.

The camera is good but the actual movement of Max can be a little clunky. However, the car has really been thought out, its reactions to the road are really life like – you’re basically driving on sand so if you move wrong you’re going to skid like I imagine you would on a sandy track. The vehicle isn’t hugely responsive, it’s a little hard to maneuver when turning – especially when there’s an enemy coming for you – but it works for what you need it for.

I’ll definitely be continuing with this game, I’m really enjoying it so far.

Have you played Mad Max? What did you think?