I’ve seen a lot of this lately…

And it just makes me want to post a load of middle finger emojis.

Like who gives a rats ass if lots of people dress up as Harley Quinn for Halloween? What about when we were subjected to men in their underwear with wrecking balls? And did everyone forget the ‘hilarious’ mankini?

But instead of ranting further, I’ll simply post this perfect response meme:

And so…moving on to my Harley Quinn Suicide Squad bat! It’s not quite finished but I wanted to share the process with you so far.

I was pretty excited to begin making it. Then I realised I have no patience and zero ability. LOL. But here I am anyway, documenting each rough step of the way.

I picked up my bat from eBay, click here for the listing.

The bat is made from foam, so I knew it would need sealing before painting. For this, I used PVA glue and simply painted it all over the yellow section:

I wanted to use spray paint, but I couldn’t find a light enough brown, so opted instead for poster paint and mixed the right shade. Although I feel like once it’s dry it will need another lighter coat.

Yep, the bat needed another coat of paint…and then it needed sealing again ready for the writing and decoration. *eye roll* Told you, I have no patience.

The bat finally dried, it wasn’t quite the smooth finish I was looking for, but I figured once the decoration was on all would be fixed. Plus, it’s just for a Halloween party, not a con or anything (I am not a perfectionist by any means).

The next step was to draw on the words goodnight, plus the lyrics to ‘I started a joke’.

I used a thick permanent marker and some Stabilo fine tip felt pens. 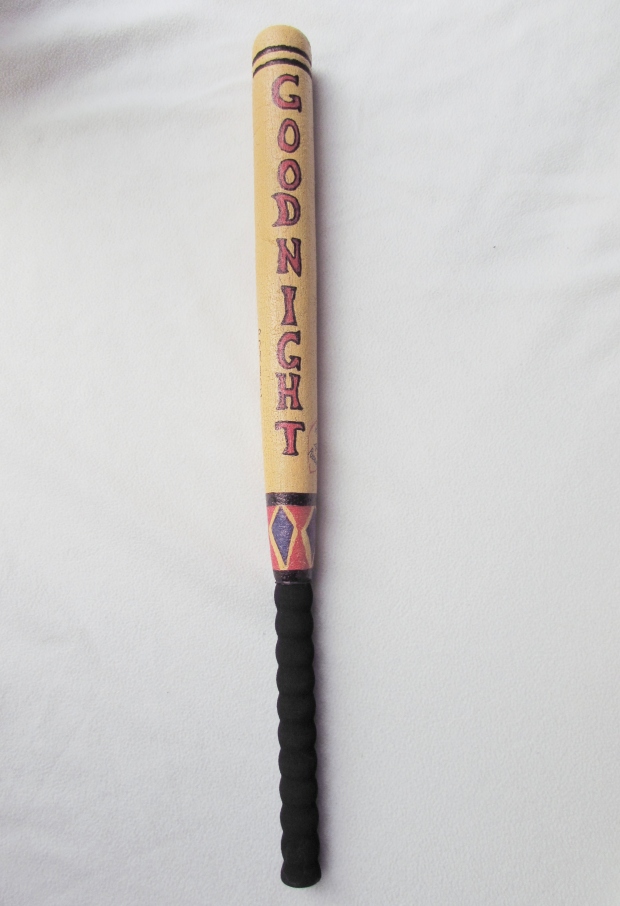 The pens took well to the paint, nothing smeared and it’s held on since being drawn. The design isn’t totally accurate, mainly because everything has been drawn on free hand, but I’m pretty pleased with how it looks.

This is what it’s like trying to take blog photos with a needy dog by the way:

Finally, all I needed to do next was to get some white tape for the handle of the bat and to paint in between the diamond shapes around the bottom!

Let me know what you think.